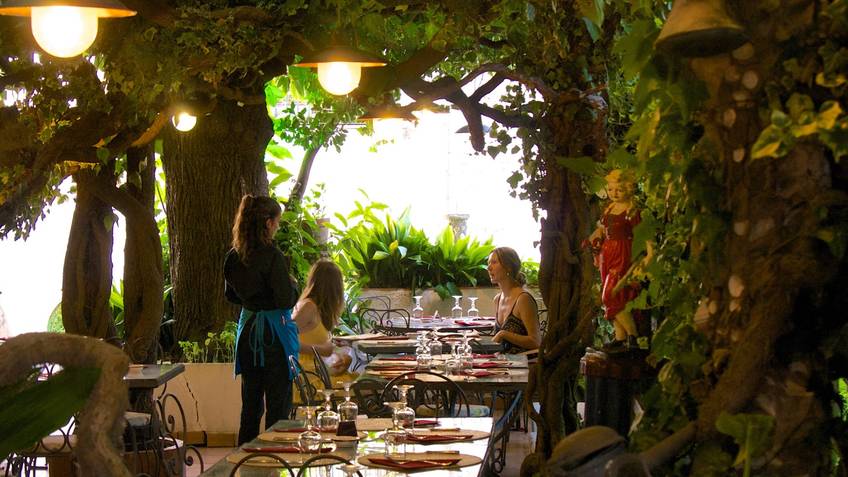 This card is no longer part of the Capri.net collection.

In Anacapri there is a local eatery which has been a favorite since opening in 1960 as just a humble osteria featuring local wine, cheese and cured meats, and gossip.
Since then, the Trattoria Il Solitario has become a favorite spot to sample the most authentic and traditional cooking on Capri in their quiet internal garden shaded by an immense ivy canopy and in a warm and welcoming island atmosphere.

From the simple plates of salami and cheese first served, to the stuffed peppers, ravioli, and eggplant parmesan, featured today: Il Solitario's dishes have become more filling but no less traditional over the years, keeping an eye on the authenticity and freshness of the ingredients. Not convinced? Well, let's just say that the daily fish special is only on the menu when Il Solitario finds fresh enough fish at that morning's fishermen's market.

Combining historic recipes from Anacapri and the traditional flavors of the island, Il Solitario's hostess Carmen is passionate about keeping the long traditional of Capri's local cuisine alive and making Il Solitario a restaurant landmark in Capri: a place with excellent food served at a fair price.

Dine under the shade of a lemon grove

Hours: Lunch 11am to 3pm | Dinner open on weekends in the summer months and every night in August
Open daily
Annual closure: from 3 November 2020 to 23 March 2021