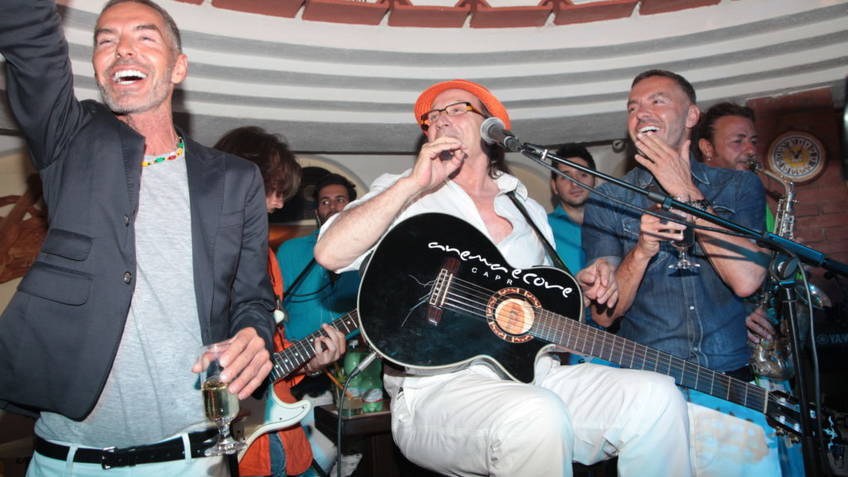 In the very heart of Capri, on a street which bustles day and night with flocks of residents and tourists, one finds a small, somewhat nondescript, doorway, so modest that the passer-by would be forgiven for not noticing it at all. Indeed, nobody could possibly imagine that hidden behind such a humble façade lies the most popular nightspot on the island, a world famous club which no visitor eager to sample the best of the islands nocturnal entertainment can afford to miss.

Over the years the club has become the most popular haunt for VIPs of every category, from popstars to politicians, high profile managers to television presenters, philosophers, sportsmen, top models, even royalty. Sooner or later they all fall prey to the mystique of the Anema e Core, lured night after night, to the rhythms of Neapolitan, latin-american, and dance music, into the realm of Guido.

A glamorous vibe with a disco heart: Taverna Anema e Core is where you can party on Capri.

After hours, the night belongs to this undisputed ruler of Capri, an authentic wizard who reigns supreme over the island from midnight until the first rays of sun illuminate her shores. This is the man capable of transforming inhibited politicians into caterwauling crooners, a truly accomplished master of ceremonies known to have convinced the most prudish, to abandon themselves in exotic dances worthy of the most talented ballerinas.

Guido Lembo is a timeless entertainer, and he plays the classics from the 1970s, traditional Neapolitan music, international pop hits, and rock anthems with equal lighthearted irony and charm.

Since 1994, visitors and locals have gathered at Anema e Core for the festive atmosphere and casual style: spontaneous and authentic hospitality put all guests at ease and make an evening here one of the most unforgettable during a stay in Capri.

The taverna serves a vast assortment of drinks and cocktails, in addition to fine wines from the cellar.

TripAdvisor Traveler Rating Based on 191 recensioni »

I went yesterday to the close party of a great season. Soooooo much fun! Gianluigi Lembo and his band ( including 2 tenori who "arieggiano" better than Bocelli) are simply the best!!!! They are... more »

after dinner to dance on tables

real special location to enjoy your holiday. you will have a sensational italian live band taht paly italiana and internationals songs .. and on the same time you can dance on the table more »

Went in for two beers because we heard live music, next thing you know their thugs shook us up for another $20 on the exit for a “band charge” it was dead more »

In the center of Capri

Let's meet in the Piazzetta!

It's always a great time to stop for a coffee break in the Piazzetta!

A rooftop terrace lounge and bar in the center of Capri.

Let's meet for a drink at La Zagara!