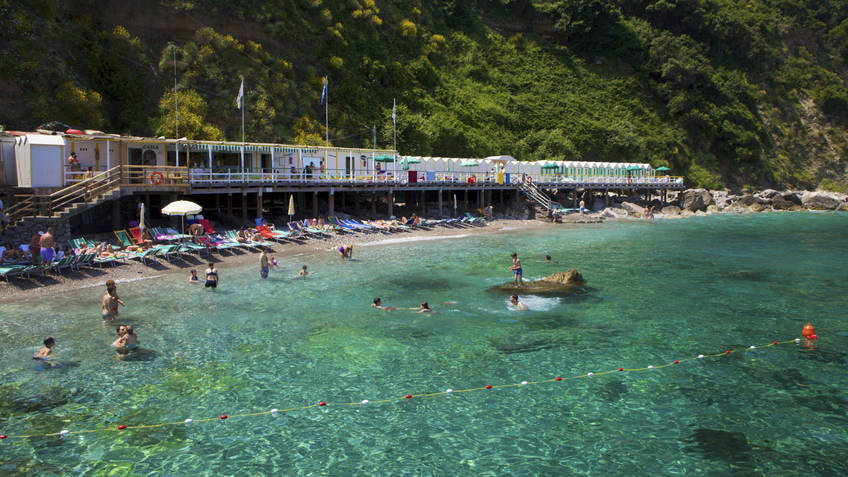 Bagni di Tiberio - The beach of the Empereor

From € 280 For 2 people
Duration 2 hours Departure from: Capri

Are you visiting Capri for one day this summer, and want to make the most of your time? Here...

A complete tour of the island of Capri on a traditional island gozzo or lancia departing from...

A day at sea to admire the Faraglioni, Blue Grotto, and lighthouse from up close, and to swim...

Or request an estimate...
Are you looking for something else, or need an estimate? Request an offer

See all our special offers

On one of the most beautiful stretches of the island's coastline, with a magnificent view of the Bay of Naples, and only a short walk or boat ride away from Marina Grande, Bagni di Tiberio is, arguably, Capris most popular bathing establishment.

In the vicinity of the ruins of Emperor Augustuss ancient seaside villa, Bagni di Tiberios pebble beach is suitable for holidaymakers of all ages, who, from early in the morning until late afternoon can be found swimming in the crystal clear sea or simply relaxing in the sunshine by the waters edge.

On the establishments wooden platforms there are beach cabins and a snack bar, the latter serving a selection of refreshing drinks, summer salads and tasty Mediterranean appetizers.
Sea, beach, relax and internet: at Bagni di Tiberio Wi-fi is free!

Rent a boat from Bagni Tiberio: hop aboard one of the island's traditional gozzo boats, and sail around the island of Capri and along the Amalfi Coast

Within steps of the beach, Bagni di Tiberios restaurant is the ideal choice for those eager to savor the islands traditional cuisine. Menus feature all of Capris best known fish and pasta dishes and the wines produced in the local vineyards.

A Boat Tour of the Amalfi Coast

"We loved this ride. The driver was very nice and explained the main points of interest! I totally recommend this trip!"

"This was an incredible experience. Truly a first class operation. We were greeted off the boat by an amazing staff and seated in a premium location for lunch and lounge chairs at the beach."

"This was the highlight of our trip to the Amalfi Coast. Vincenzo was fantastic. Knowledgeable and friendly. Capri is so beautiful. Seeing it from a private gozzo was amazing. "

"Definitely on of the most memorable parts of our three week trip through Europe the boat was well kept and beautiful. The experience was one to define a lifetime. He was welcoming, fun and kind. "

"Seamless reservation experience and our 4 hour boat ride was perfect! "

"Wonderful 3 hour tour. Our captain took us into almost every grotto and cove, told us the stories connected with each one, pointed out every landmark and natural features. Need more drinks on board."

"What an experience fantastic boat top quality skipper made some great suggestions and knew what he was doing. The trip around Capri was very interesting the skipper gave us some chat on the history"

"This truly was the highlight of my trip! I was on the gozzo solo and my skipper Giancarlo was professional, friendly and super informative. This was the best way to see the turquoise water up close!"

TripAdvisor Traveler Rating Based on 350 recensioni »

Come for the restaurant. The food was incredibly fresh and delicious and served with a jug of delicious white wine with peaches which somehow just worked. The courgette pasta was a speciality. The... more »

We took a boat cruise tour departing from Positano which brought us to this restaurant due to the free shuttle provided to the Capri port afterwards which our tour provider would not have to... more »

Amazing way to spend a day

We came to Bagni Tiberio in the morning and left in the afternoon. Sunbathing, swimming in the sea and eating amazing food. The staff are amazing, very friendly, helpful and polite. The best way of... more »

The beach of Bagni di Tiberio is a pleasant, 10 minute stroll from Marina Grande, Capris main port and fishing district. Holidaymakers unwilling to walk can sail to the bathing establishment aboard one of the islands characteristic gozzo fishing boats which regularly depart from the small wharf close to the ticket offices of the major hydrofoil companies.

The historical hot spot on Capri

Crystalline water and a view over the Faraglioni

Beach club and restaurant at the Bay of Marina Piccola

Swim at the foot of the dramatic Faraglioni

Relax between the Faraglioni