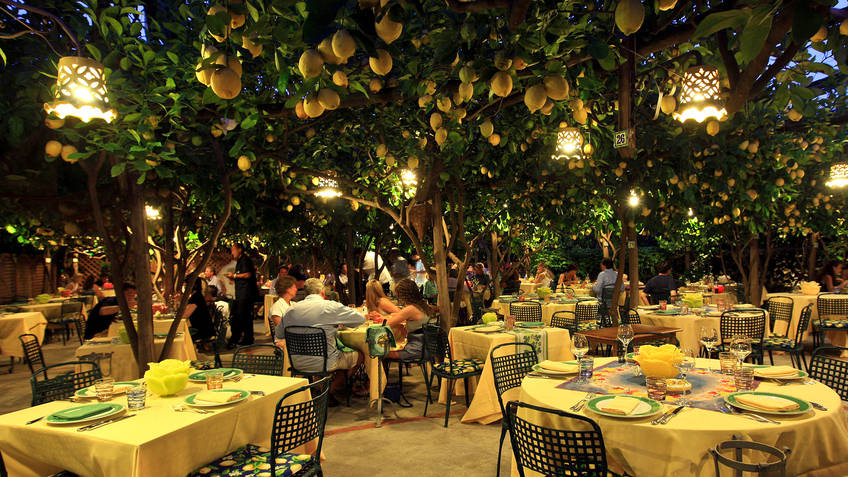 Moonlit evenings have an even more bewitching power at the De Martino brothers' Restaurant, magical moments witnessed by a host of celebrities who have contributed to the success of this enchanting place, "Under Paolino's lemon trees".

"Do you know the country where lemons flourish? Down-there, down-there, I'd like to go with you my love!!!". Paolino De Martino did'nt really think that Goethe had ever been a visitor on the island of Capri, nor did he think that the writer had admired his gardens dashed with the yellow light transmitted by the rows of lemon trees with their huge fruits, but that phrase had a special appeal for him.

He had heard it from a literary friend of his, one of those people who, as far as he was concerned, read a lot but thought very little. He was convinced that his lemon grove which provided shelter from the wind and rain even for the rabbits, and produced lemons so abundantly - and how many! - was the most beautiful in the whole of Capri.
"Under that sky of lemons as big as stars I'd like to go with you, my love..." he repeated.

It was really something else 30 years ago, reminises Paolino, when one used to be invigorated by a simple sea breeze, and the moon with its strong rays appeared like a white sun thrown into the sky by who knows who and for what reason.
At sunset, when silence returned to the island, many an islander chose to meet in Paolino's garden, not far from Palazzo a Mare, in front of Villa Bismark, and a few meters from the playing field where the children from Marina Grande kicked their first football, along that narrow road which abruptly transforms into a flight of steps precipitating towards the sea of Tiberio.
Many a fleeting meeting and secret pact of friendship were made under that sky of lemons, huge lemons with such thick pulp that they could easily be sliced into salads, and so began the adventure of Paolino.

And like all stories where hard work and sacrifice are rewarded, with that son called Michelino (known as Lino) at the end they all arrived: Niarcos, arriving on the island with his fabulous "Atlanta", Leopoldo Pirelli, president of Mercedes Benz, Conte Augusta, Giorgio Falk, Cesare Romiti, Gallucci, Matarrese, Morabito the president of Isreimer, Luca di Montezemolo and Edwige Fenech, Leonardo Mondadori, Dianne Furstenberg, Tirelli, Ferragamo, Tom Cruise and Mimi Rogers, John Beluschi, George Hamilton, Lino Banfi, Lucio Dalla, Luciano De Crescenzo, Nanny Loy, Lina Wertmuller ... celebrities whose autographs are all meticulously archived and treasured by Lino since 1978: how many tales still to be told under those lemon trees where, "I'd like to take you, sheltered from the wind and rain"?

Closure days:
Open 7 days a week. Open only for lunch from October to March

"Had a fabulous evening here with my friends, the setting is absolutely beautiful with lemon tree's all around. I felt like I was in a movie. Exquisite food, especially the desserts. Amazing"

"It's such an amazing experience to sit under the lemon trees and dine. I loved very much the place: so romantic and fascinating. Food of top quality and staff really attentive. Very good indeed!"

"A top notch experience this is a must"

"Great restaurant. Food was different from the one of other restaurants, offering some buffet style antipasta and dessert. A magical experience!"

"The lemon trees are Da Paolino's greatest attraction, for sure, but beside the fantastic atmosphere the food is very tasty. Finish your meal with a limoncello shot, it's delicious!"

TripAdvisor Traveler Rating Based on 1996 recensioni »

We visited Da Paolino in July this year. It was a draw-dropping, beautiful experience from the second you walk into this hidden oasis to the time you leave. The food and wine quality were... more »

Went for the ravioli and was not disappointed. Wow we’re they good but so was everything else. The grilled mozzarella and calamari was perfect. I’m still thinking about them. Cozze just how I like... more »

Food way below average compared to other decent venues at Capri. Super mass production - like local McDonalds. We knew food is not going to be top, but did not think it would be so bad either. Like... more »

Ristorante Da Paolino is located in the Palazzo a Mare district of Capri, opposite Villa Bismark.
A 5 minute walk from Marina Grande, the restaurant is just a short taxi or bus ride away from the Piazzetta and the center of Capri.

Mediterranean cuisine with a stunning view of the Bay of Naples

When restaurants have wow! factor

Food with soul, just like Mom used to make

A meal at Capri's gastronomic museum

Meet and eat at Rendez-Vous!