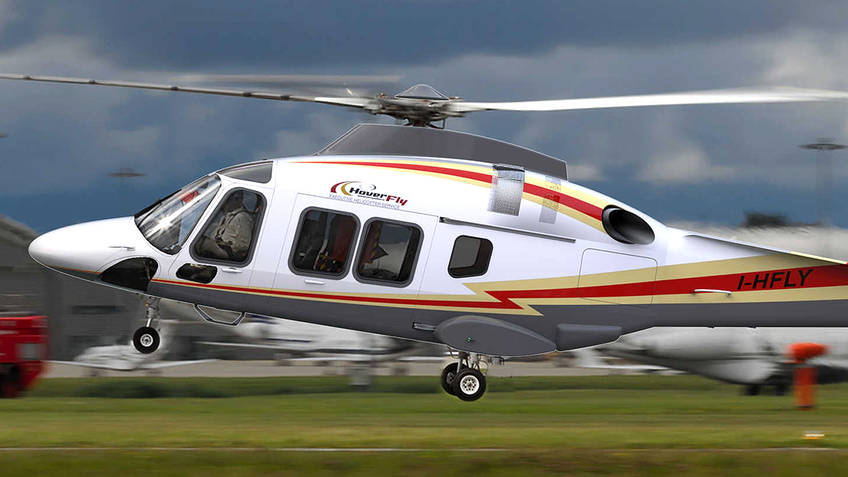 HOVERFLY Helicopters' exclusive helicopter transfers and excursions provide swift and safe transportation from the island of Capri to all the principal tourist destinations in central and Southern Italy, from the famous holiday resorts of the Amalfi Coast, Sardinia and Sicily to the art cities of Rome and Florence.

HOVERFLY helicopter transfers to Capri, available from all the major cities of Central Italy, are the ideal choice of transport for those wishing to reach the island in the shortest time possible, allowing them to add precious hours to their vacation and, at the same time, enjoy a breathtakingly panoramic journey.

HOVERFLY Helicopters also operates a series of tourist excursions with departure from the heliport of Damecuta in Anacapri, flying over all the most fascinating places on the Bay of Naples, from the city of Naples to Mount Vesuvius, Pompei, Herculaneum, Amalfi and Positano.

HOVERFLY Helicopters' operating bases are located in Bellizzi (Salerno), next to the airport of Salerno Costa D'Amalfi, as well as in Rome and in Tuscany. Thanks to its experience and know-how acquired over time, Hoverfly keeps on enhancing and expanding its fleet succeeding in offering a wider range of helicopters and superior services to its customers.

HOVERFLY provides helicopter connections between the island of Capri and all the main tourist destinations of the Amalfi Coast, Sicily, Sardinia, as well as the most beautiful Italian cities (like Venice, Perugia, Rome, Florence, Forte dei Marmi, Milan, Matera...) and the most remote locations not readily serviced by commercial airline services and hardly accessible in other ways."

HOVERFLY HelIcopters' operative base is located at Naples Capodichino International Airport, in Bellizzi (Salerno), next to the airport of Salerno Costa D'Amalfi thanks to the partnership with Hoverfly in Roma, Forte dei Marmi and Milano.

In the last 30 days, 134 travellers
visited this page.