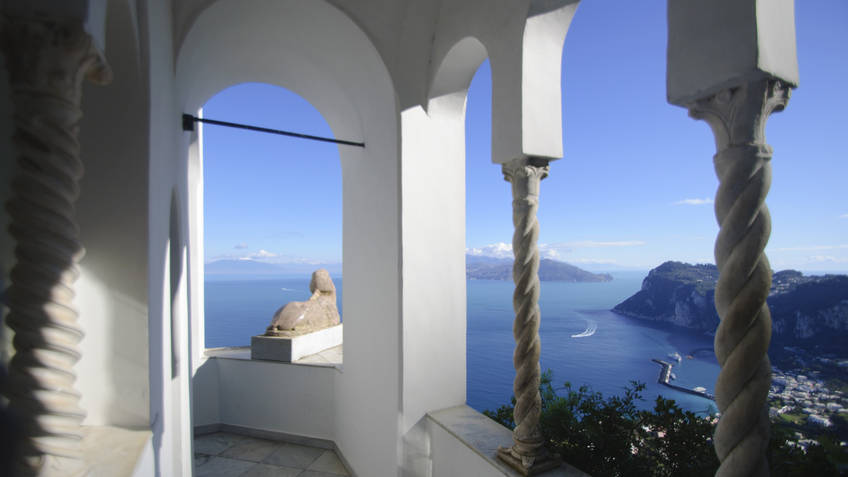 After the Grotta Azzurra, the Museum-House of Villa San Michele is Anacapri's most visited tourist attraction. The villa dates back to the late 19th century, when the Swedish physician, writer and recreational archaeologist, Axel Munthe, adjudicated the site, previously occupied by an ancient roman construction, the perfect place where to build a house in which to display his collection of relics and classical artefacts.

Whilst admiring the many fascinating exhibits on display in the museum, visitors are likely to linger longest before the head of the Medusa, the bust of Emperor Tiberius and the magnificent Egyptian sphinx.

Villa San Michele's beautiful Mediterranean gardens are an integral part of the Museum. This is where both the remains of the ancient Roman villa and the little Medieval Chapel, this latter restored by Munthe in person, can be seen. From its position on the north-eastern slopes of Anacapri, some 327 meters above sea level, Villa San Michele boasts a privileged view point, gazing out across the entire Bay of Naples.

"So peaceful and beautiful."

TripAdvisor Traveler Rating Based on 1871 recensioni »

A beautiful place to visit

We visited this place twice - in May and October. We had lovely time both times. The place is worth seeing - the location, the view, the garden, the villa - everything brings joy to the senses. I... more »

Wish we had had time to go around inside. But views from here are fantastic

We went up to Anacapri as we were on a day trip from Sorrento so were aware of time a lot. We had done a boat tour of the island in the morning upon our arrival which was fantastic. Then we got a... more »

End October 2019: I was told by my taxi driver on the way up to Anacapri [as my bus took off without me] this was an unusual season and it was longer than expected. A pricey trip E20, though it... more »

Villa San Michele is located just a few meters from Piazza Vittoria, central square of Anacapri, at the end of a characteristic shopping street and enjoying breathtaking cliff edge views over Capri.

In the last 30 days, 6 travellers
visited this page.

The history of Capri

A Philosophical Retreat along the Migliera Path.