Small hermitages perched on the cliff edge directly above the sea, chapels built only steps away from the water's edge and splendid baroque houses of worship right in the heart of the island's two towns. Spiritual places built for prayer and devotion, historic buildings of immense artistic value, the churches of Capri are the edifices which, perhaps, best reflect the beauty of the island on which they were constructed many years ago.

At the top of the flight of steps in the famous Piazzetta, the church of Santo Stefano, once the cathedral of Capri, is the town of Capri's principal house of worship. The edifice, designed by the Royal Architect, Francesco Antonio Picchiatti (responsible for Naples' Piazza San Domenico Maggiore) and realized by Marziale Aniello Desiderio was built on the site of the 6th century Benedictine convent, the only trace of which is the clock tower in the square.
Constructed in Capri's flamboyant baroque style, the proto cathedral features cupolettas, vaulted ceilings and molded chapels, typical of the island's late 17th century religious architecture. Sections of the pavement have been realized with marble found during excavation work carried out on the site of Villa Jovis, one of the 12 residences which Emperor Tiberius built on the island of Capri. A silver statue of San Costanzo, patron saint of the Island of Capri, takes pride of place amongst the treasures conserved in the sacristy.

The Chiesa di Santa Sofia is situated in the historic center of Anacapri, overlooking the piazza located just off the town's lively Via Giuseppe Orlandi. Without doubt one of the most important of the island's religious buildings, the Church was constructed in 1510 to replace Anacapri's old Parish Church of Santa Maria di Costantinopoli. A number of rooms (namely the sacristy and oratorio) were retrieved from what remained of the Chiesa di San Carlo. The central nave is barrel vaulted. The side aisles feature the island's classic rib vaults. The chapels, dedicated to Sant'Antonio, patron saint of Anacapri, and the Madonna del Buon Consiglio, are later additions. The church's two bell towers and splendid baroque facade, dominate the piazza and the maze of little lanes lying between the church and Anacapri's lush green coastal countryside.

Also in the historic center of Anacapri, within steps of the main church dedicated to Santa Sofia, the Chiesa di San Michele Arcangelo was constructed between 1698 and 1719, at the same time as the neighboring Theresian convent was being restored. The famed Neapolitan architect, Antonio Domenico Varraro, was responsible for the building's Greek Cross floor plan and the baroque details typical of the Kingdom of Naples 18th century ecclesiastic edifices.
The church is famous for its majolica tiled pavement, realized by Leonardo Chiaiese. Depicting the Expulsion from Eden, the artwork offers a poignant interpretation of Adam and Eve's despair and an almost surreal vision of a brightly colorful earthly paradise inhabited by many fantastical creatures. Visitors can view the pavement from a raised platform. During religious services, the artwork is protected beneath carpeting.

Church of St Costanzo or of Maria della Libera - Capri

Situated on the Strada Provinciale, the road which leads to the old fishing district of Marina Grande, the small Chiesa di San Costanzo, dedicated to the patron saint of Capri and the Madonna della Libera is the island's oldest house of worship. Built in the 5th century, on the site of an Ancient Roman basilica, the edifice has classic byzantine architectural features, including a Greek Cross floor plan, 12 columns in cipollino marble, and vaulted domes. The Arabian style bell tower is a later addition.
In the 14th century, between 1330 and 1370, the Count Giacomo Arcucci ordered the addition of the presbytery and vestibule. The 1990 restoration brought the building, and in particular the Ancient Roman pavement, back to its original splendor.

Church of the Cross - Capri

Visitors making their way to the archeological site of Villa Jovis invariably take time to stop and take a peek at the Chiesa di San Michele alla Croce (often referred to simply as the Chiesa della Croce), situated just steps away from the junction of Via Tiberio and Via Matermania. Surrounded by a high perimeter wall and set in beautiful Mediterranean gardens, the church is open to the public for religious services only.
The origins of Capri's Chiesa della Croce, used as gunpowder deposit during the 19th century British occupation of the island, date back to the start of the 12th century. Due to the number of alterations, restorations and enlargements carried out over the years, the church features a whole range of different architectural styles. The portal is decorated with an impressive late gothic lunette.

Capri's Chiesa di Santa Maria del Soccorso is situated within the boundaries of the Villa Jovis archaeological site. Believed to have been erected in 1610, the Church is characterized by its vaulted roof, typical of the island's architectural tradition, and extremely simple interiors in which a beautiful canvas depicting the Virgin Mary takes pride of place. The courtyard opens out on to a spectacular view of the Sorrentine Peninsula and the Bay of Naples. The bronze effigy of the Madonna, at the center of the courtyard, is of recent manufacture, and replaced the previous statue which was struck by lightning during a storm. Holy Mass is celebrated in the church on the 7th and 8th of September each year, during the festival held in honor of Santa Maria del Soccorso.

An ancient hermitage immersed in the beautiful natural landscape of Cetrella, not far from the summit of Monte Solaro, on the cliffs soaring above the sea surrounding Marina Piccola, the Chiesa di Santa Maria a Cetrella was originally nothing more than a simple house of prayer with bell tower. The sacristy is a 19th century addition, built at the same time as restoration work was being completed.
The Chiesa di Santa Maria a Cetrella once served as a hermitage for Franciscan and Dominican monks (their cells are an important part of the religious complex), but also as a refuge for the brothers of the charterhouse of San Giacomo who regularly used the "Passetiello" pathway, which passes close to the hermitage, to reach Anacapri.
The painting of the Madonna conserved within the church is particularly dear to the island's sailors and, in the past, Capri's coral fishermen would climb up to Cetrella and pray before the sacred image prior before setting sail. The view from the tiny church is truly breathtaking, encompassing the entire sweep of the Bay of Naples: from Capo Miseno all the way to Punta Campanella.

Up until 1595, the Chiesa di Sant'Anna (which was previously called the Chiesa of San Pietro e Paolo and then the Chiesa di Santa Maria delle Grazie) functioned as the town of Capri's parish church. The edifice, which is no longer consecrated, sits in the medieval heart of Capri, hidden amidst the houses of Via Madonna delle Grazie and just a few minutes away from the Piazzetta. In the past it was in this church that the islanders' newborn children were baptized and for this reason it was dedicated to Saint Anna, the protector of expectant mothers. The façade of the building was restructured in the 17th century and is characterized by a small rib vaulted bell tower..
The Chiesa di Sant'Anna was built in the 12th century and, along with the Chiesa di San Costanzo, in Marina Grande, is one of the oldest churches on the Island of Capri. A typical three nave structure with barrel vaults, the byzantine style apses contain fragments of exquisite 14th and 15th century frescoes. The external courtyard, raised above the level of the road, still conserves the columns which once served to sustain the pergola, a feature normally used in the island's vernacular architecture.

The Chiesa del Santissimo Salvatore is situated just a few steps away from the Piazzetta of Capri and the proto Cathedral of Santo Stefano. The edifice was constructed in the 17th century, between 1661 and 1685, near to the Theresian Convent. The design of the church has been attributed to Dionisio Lazzari, an architect and sculptor associated with the Neapolitan Baroque School, and features an entrance with two converging flights of steps. The interiors are characterized by a classical barrel vaulted ceiling and a gallery from where the nuns discreetly attended the religious services.

One of the most enchanting of Capri's houses of worship is situated close to the beach of Marina Piccola, on the site of an ancient watch tower, which was used to guard against incursions by Saracen pirates. The construction of the Chiesa di Sant'Andrea, which is built according to the designs of the famous painter, Riccardo Fainardi, was financed by the German banker, Hugo Andreas, who was eager to fulfill the fishermen of Marina Piccola's wish to have a church to dedicate to their patron saint. Hugo Andreas also provided the funds for the construction of the island's German Evangelist Church.
The pronaos of the Church is supported by two columns. The central apse stands in the very same position once occupied by the old watch tower. The central altar is embellished by a triptych representing the crucifixion of Saint Andrew. In one of the lateral apses there is an altar dedicated to the Madonna of Pompei and a spiral staircase leading up to the organ.

Anacapri's Chiesa di Santa Maria di Costantinopoli was built in the 11th century on the road leading to the breathtakingly beautiful Migliera viewing point, in the town's old &quot;Li Curti&quot; district. The gate of the church opens onto an avenue of Cyprus trees and a garden which, in years past, was used as graveyard. A typical rural church with simple façade, square hall and rib vaulted bell tower, up until 1510, the year in which work of the Chiesa di Santa Sofia was completed, the Chiesa di Santa Maria di Costantinopoli served as Anacapri's parish church. 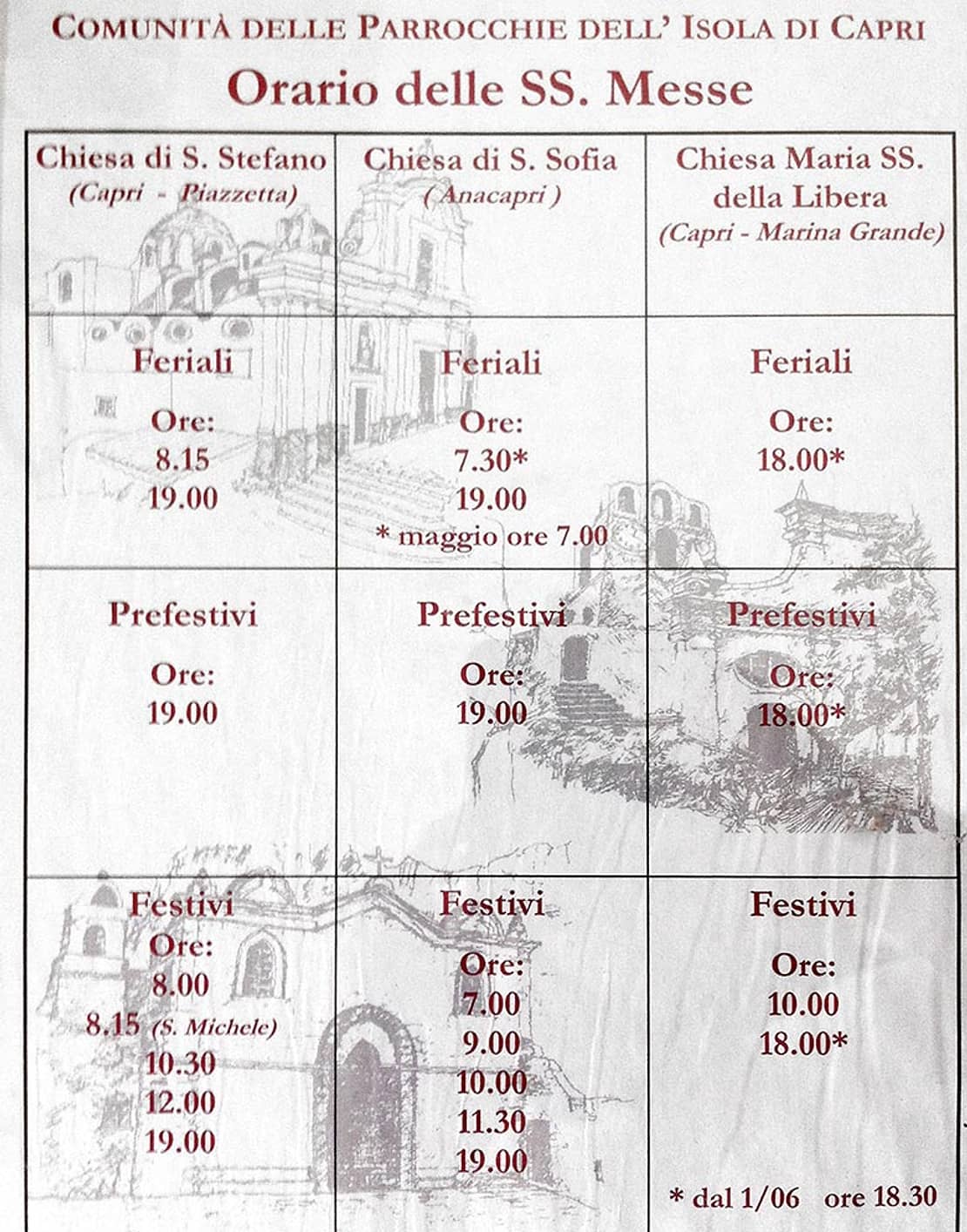 Mass schedules on Capri do not change during the year, with the exception of Vespers, which are held a bit earlier after the switch from Daylight Saving Time to standard time on the last Sunday of October. Feriali indicate weekday Masses; pre-festivi indicate Saturday Masses, and festivi indicate Sunday and holiday Masses.

A Jewel of a Museum in the Center of Capri

The tiny Museo Cerio is a jewel of a museum in the center of Capri town.

History of the island

The history of Capri island

The writers, artists and aristocrats who fell in love with Capri

This brick red complex is a perfect example of the typical eclectic residence-museum very much in fashion at the end of the 19th century.